Wasaga Beach has one of the most typical but interesting weather systems in Ontario. During the summer months, you are likely to see sunshine and the odd cloud. Summers tend to be comfortable for most residents and tourists alike. In the winter months, you are likely to experience a drop in temperatures, some gusty winds, and of course, snowfall. You are also likely to find temperatures dropping below minus. 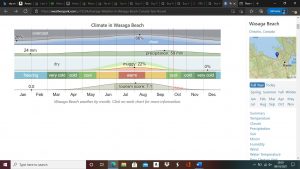 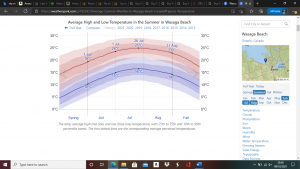 Wasaga Beach experiences seasonal clouds to varying degrees. Typically, from May to October, Wasaga Beach is clear and cloud variations aren’t seen as often. While it can be partly cloudy, August usually has the clearest skies around sixty-five percent of the month. At the end of October and the beginning of November, is when the months begin to get cloudier. This tends to last up until the beginning of May.

Wasaga Beach enjoy six months of the year with little cloud coverage and others with heavy cloud coverage. Typically, it varies depending on the months and seasonal changes. For instance, January tends to be the cloudiest month with the skies being cloudy or overcast around seventy percent. 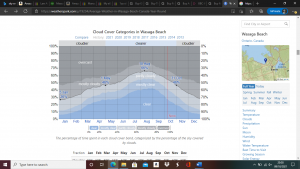 The Precipitation in Wasaga Beach

Precipitation (or wet days) in Wasaga Beach varies considerably, depending on the month. Typically, the wetter months tend to start around May and end in November. You’d think the wetter months would be in the cooler months, however, the climate in Wasaga Beach can vary since it’s near the coastline. You have a greater chance of experience rain, by over twenty percent, during the daytime between May and November. October tends to offer the most rainy days with an average of nine days or so of precipitation of 1 millimetre.

From mid-November to the beginning of May, this is when you’ll likely experience fewer rainy days. For instance, on average, only four days in February experience precipitation of 1 millimetre or more. Of course, precipitation varies in Wasaga Beach. Wet days can occur throughout the year, even in the warmer months, but is less severe. Snow can be seen flourishing for at least two or three months, usually mid-December to late February. 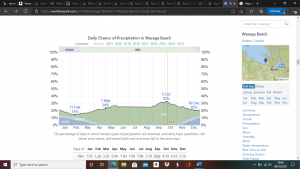 It’s thought the earliest sunrise is seen in June, starting around five-thirty a.m. December often has the latest sunrise at 8 a.m. The earliest sunset is just after four-thirty in the afternoon (December) and latest is around nine p.m. (June). It does vary considerably and daylight hours or sunlight, depends on the month. For example, January experience on average, nine hours of daylight, whereas July gets fifteen. 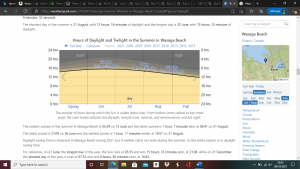 The moon’s rise varies considerably, depending on the season in Wasaga Beach, as well as climate changes. 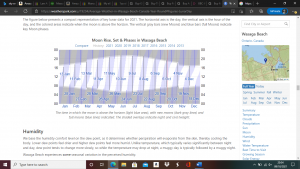 The Humidity in Wasaga Beach

Humidity in Wasaga Beach varies because of the seasonal variations. Typically, the humid or ‘muggy’ period starts in mid-June and lasts until the middle of September. During these months, you are likely to experience an uncomfortable heat, whereby you feel the weather is uncomfortable. July often has the most days of humidity, with around five muggier days. This can often leave you feeling uncomfortable because you don’t feel like there’s a cool breeze and sweat sticks to your skin.

February often has fewer humidity issues; basically, they are non-existent. Of course, humidity can vary throughout the year, but it’s mostly more noticeable during hotter months. On muggy days, you can feel very uneasy as you find it difficult to cool down and stay cool. 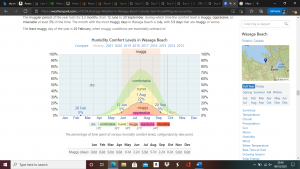 Wind speed and direction differs during each season. For instance, late October to mid-April, tends to be known as the windy season as you experience windier days. Speeds can reach over sixteen kilometres p/h. January is also the windiest and experiences a wind speed of around twenty kilometres p/h. From late April to late October, you’ll find the season is calmer and wind speeds drop to twelve kilometres p/h. Usually, the wind flow from a westerly direction. 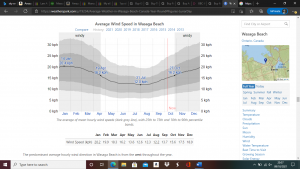 The Water Temperature in Wasaga Beach

Temperatures tend to fall to five degrees Celsius (and lower) during December and May. In March, the average water temperatures stand around one degree Celsius. This is the coolest period and bathers are not often too ken to dip their toes into the waters near Wasaga Beach. 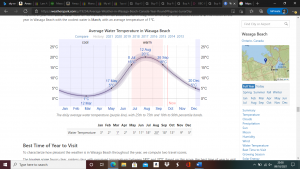 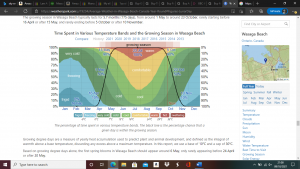 Brighter periods often help produce great solar energy bursts throughout the year and there are bright and dark periods. From May to August, this is known as the brighter period and creates over five-point-eight kwh of energy. June tends to be the brightest month of the year. Between October and February, this period produces less solar energy and is known as the dark period. Only two-point-three kwh of energy is produced during these months. December is the lowest solar energy-producing months. 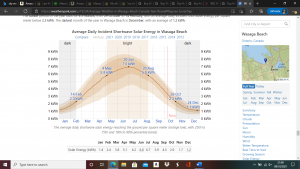 When to Visit Wasaga Beach?

Wasaga Beach can be a great destination to visit; however, it depends on the type of vacation you want. For instance, tourists tend to prefer hotter and rain-free weather. If that is what you’re looking for, it might be better to visit Wasaga Beach from June to September. July and August are the peak seasons since the temperatures average between eighteen and twenty-seven degrees Celsius. Of course, if you prefer a winter holiday, you’ll prefer to go much later in the year; the weather will tend to be colder and wetter. Wasaga Beach is a beautiful destination, and it can be a wonderful place to visit throughout the year.

Welcome to my website. I am Sam W. Woolf  and I live in USA. I am a specialist on Beach Accommodation and Weather . If you have any questions, just send me a message, I will get back to you as soon as possible.

Which Wasaga Beach Rentals Are Best for Your Vacation? 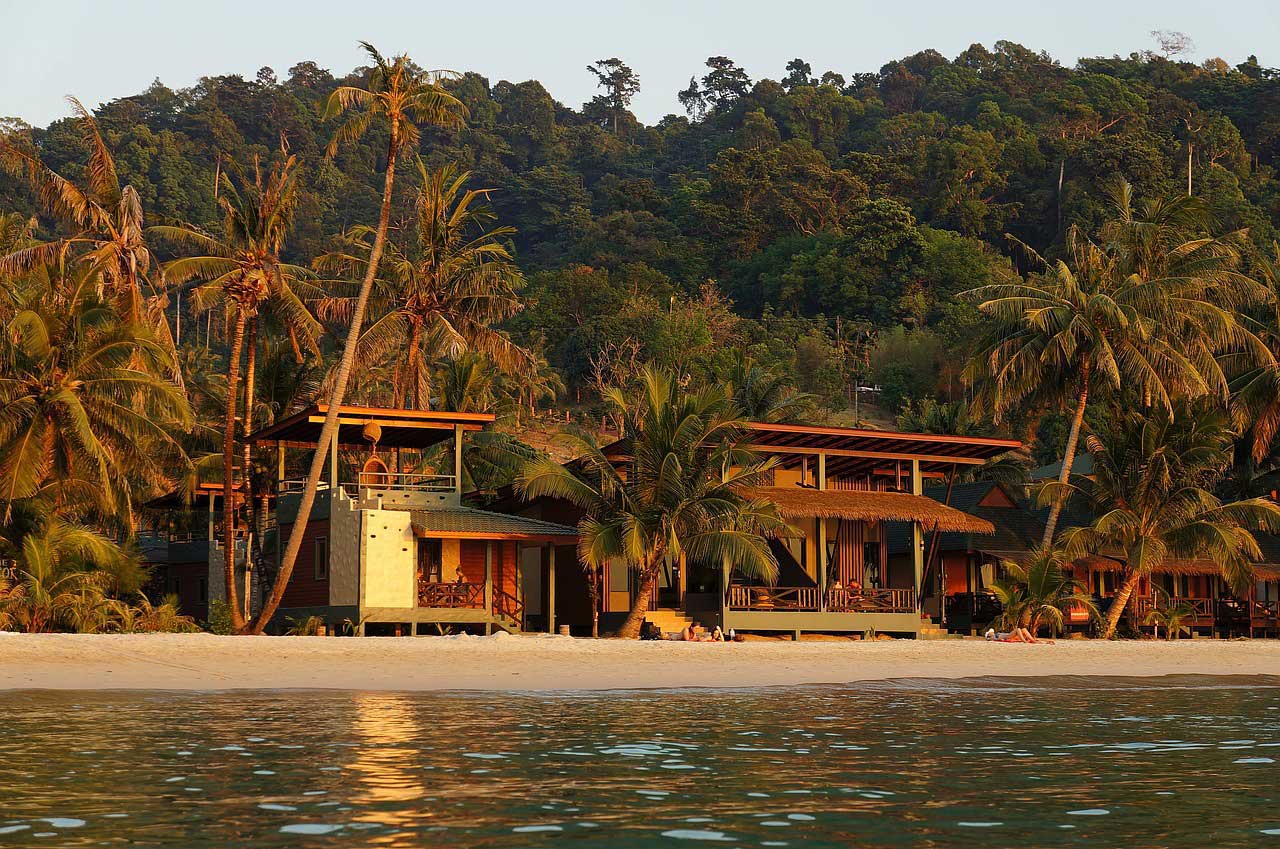 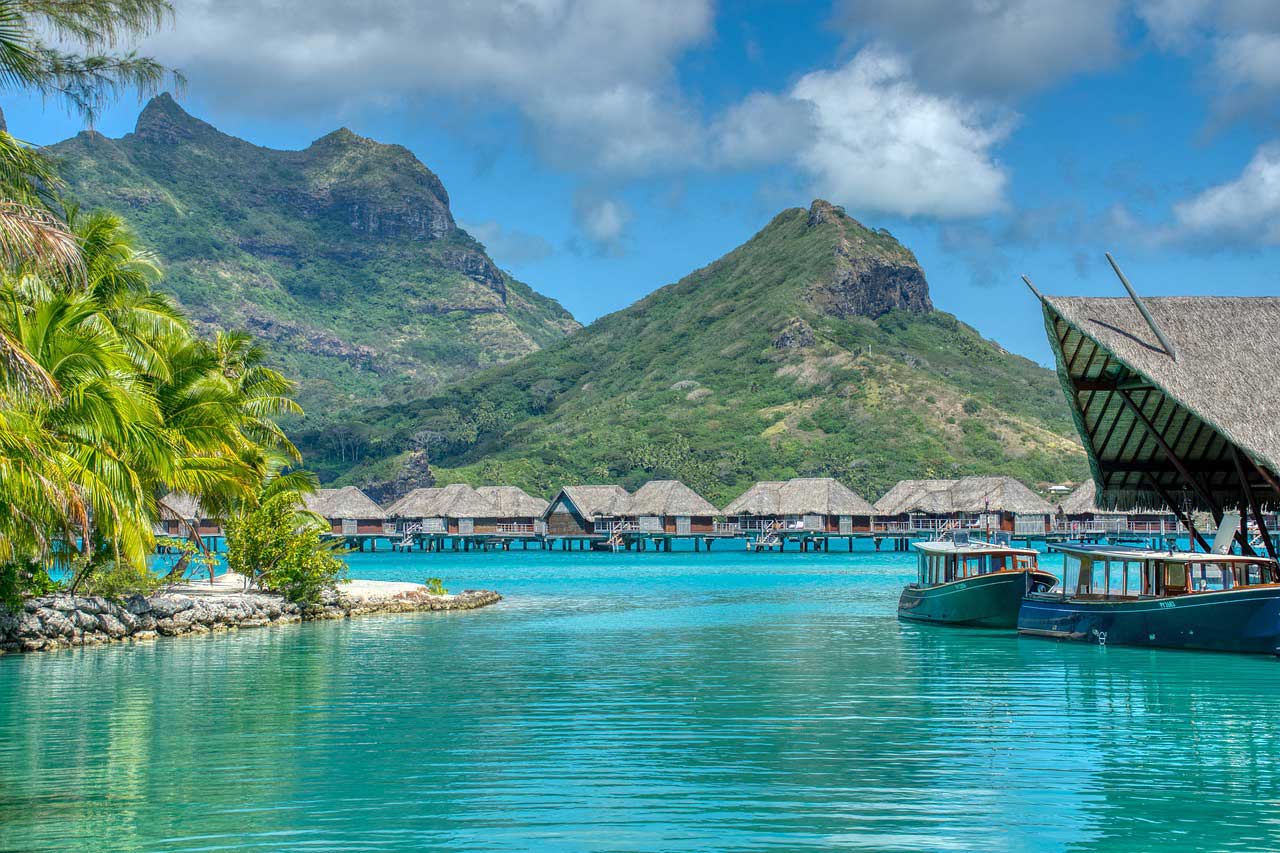